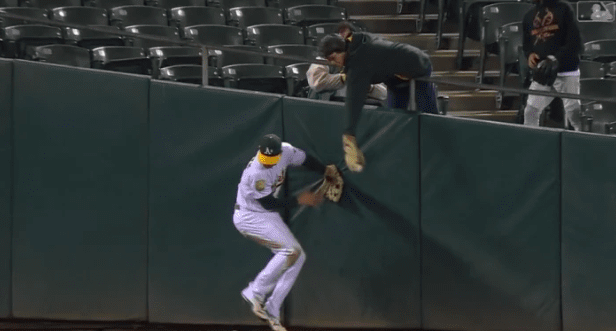 If the As are smart they’ll make sure this lady stays far away from the Colosseum come post season. An regular season female Steve Bartman we have here.

The Cubs have Bartman and, assuming this lady took rapid transit to the game tonight, the Athletics now have BART woman. … I'll see myself out.pic.twitter.com/fZQrRgHwCm

First off if your going to interfere you have to make the snag. Trying to make the grab with that loose leather of a glove she’s probably had since the 80s. That mitt is more used up than Stormy Daniels. Sadly it’s a dying breed the ones that bring the glove to the park. Also one of those cute only if your 8 or 80 situation. A 25 year old like me or 50 year old guy without a kid with him gets frowned upon. Personally I think it’s cool and acceptable at any age. It’s the closet to the real thing is average guys are going to get. Give em a break. That being said her being a woman of any age gets an ok from the public I guess.

Now should it be mandatory that people that commit the Bartman crime should be escorted out? It did affect the game and the A’s flubbed that inning. Sometimes I assume it’s for safety of other fans getting mad and confronting them? Like Bartman would’ve been beaten and battered escaping Wrigley. I don’t know if any As fans are getting riled up at a regular season game even though they are in contention. Players have been complaining all season in a convincing way to get fans out there. Just mild interest even though they are the surprise team of the Major leagues this year.

My final verdict is if you commit these crimes of robbing an out away especially your own team, you should be banned from first row seats. Simple. How do they even ban people anyway? Like streakers that get banned from stadiums how do they track it? Tens of thousands of fans, if they don’t buy their own ticket so they aren’t in the system just glide on in. I suppose if somehow someone recognized the person would be arrested for trespassing which may or may not be a felony? Who hasn’t trespassed before anyway.