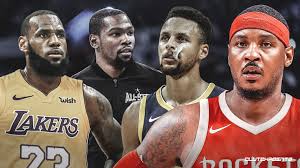 This is starting to get sad and embarrassing for Melo. Tweeting at Lebron then curry and Durant before deleting it a couple minutes later. No one wants the poor man and he can’t let it go. He’s trying to tweet the Lakers or better yet the Warriors signing him into existence on social media. All time low. Maybe even did it knowing he’ll delete em because it would get the media talking about him. Talk about him enough teams will remember hes available and maybe give him a call.

I can see Lebron feeling bad and maybe making Magic pick him up but that won’t be til the trade deadline after the Lakers axe half their current roster. I’d rather have Melo jacking it up then Caldwell-Pope.

For the warriors it would little to no sense. Negative impact indeed Melo would give to Golden State. Would be something come January if Melo and Boggie were playing for the Warriors. Nick Young was a better fit than Melo would ever be.

Just hilarious that Melo is sitting around wearing his #stayme7o gear tweeting. Eating some Honey Nut Cheerios with La La.

Looks like Lebron and Melo went out to eat a couple nights ago in the Big Apple. Lebron probably telling him hes doing everything he can to get Carmelo on the Lakers. But secretly we know he wants no part of the Melo mess.

Side note they go to a 5 star restaurant and dress in sweats? Lazy and classless if you ask me. Come on. I’m sure the sweats cost more than any premier clothing I own but that doesn’t mean its worthy to ear. Setting bad examples for the kids!